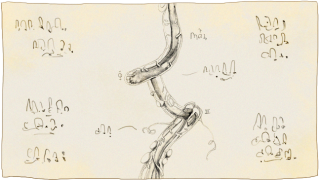 Firstly we’d like to thank you for your patience. It has taken longer than we hoped to get all the information needed so that we could make a clear report regarding the gastroenteritis which spread at Waking Life 2017. After a few weeks of thorough investigation, we were finally able to put all the data together.

Initially people at the first aid were treated for a heat stroke, exhaustion or dehydration. It was a very hot week, with temperatures reaching up to 40 degrees. Symptoms reported at first were tiredness, vomiting and nausea. When the first guests with complaints of diarrhea and abdominal cramps came in, our medical team concluded that there had to be a different cause. Rumours spread that the tap water was contaminated. However, the water for taps and showers were connected directly to the municipality’s water system, which in this case is potable and clean.

On-site medical interventions were rehydration and treating of nausea or cramps. A few cases have been treated in the hospital of Portalegre. The information we received was that no antibiotics were given at that time as stool samples had not been analyzed yet. Although we suspected a viral gastroenteritis, there was no certainty yet whether we were dealing with a virus or a bacteria.

On August 24th we took samples of the tap water, shower water and lake water for analysis. The analysis has been done according to the WHO guidelines for drinking-water quality. The results indicate that the water was sufficiently hygienic for human consumption and tested negative on all germs coming from the human gastrointestinal tract, including E. Coli, Salmonella and Legionella. In the lake, no bacterial hazards have been detected. The escalation of the gastroenteritis suggests a viral infection with symptoms similar to Norovirus. However, Norovirus can easily be indicated in human stool which in this case has not been found. We conclude that neither tap or lake water caused the contamination that spread on site and post Waking Life. Contamination through food has been excluded as well as there is no evidence or reports suggesting a bacterial infection. Regarding health there is nothing to worry about, no further action besides the earlier suggested treatment for gastroenteritis is needed.

While we are still investigating other samples such as those of sheep feces, it’s almost certain that the virus was brought in by a person, either ill or just carrier of the virus. The gastrointestinal illness was probably airborne and passed on by contaminated surfaces or objects. External research suggests that local weather factors such as temperature or contact with people used to different environments can play a role in the spread of infectious gastroenteritis. Exhaustion and insufficient hydration also have an effect on the immune system.

Waking Life can structurally improve to diminish or prevent the possibilities of such a virus to spread and we will do everything we can to do so. This includes improvements in toilet and bar infrastructures, awareness of health and safety procedures for visitors and providing more running water throughout the terrain to increase overall hygiene.

During the coming weeks a full evaluation will be made which will help us implement these improvements into next year’s edition. You can always contact us through e-mail with any further questions.

_
This report was written with the help of biOurb laboratory and the Waking Life medical and safety team.